This unevident piece of a dialogue between Charlie and Mrs. Rossi presents the entry valuable information on the one among the most well-known characters in movie history. “They” that way signifies both the family (Frank’s older brother) and the society, which once glorified the war hero and a man of power. These first lines about the Lt. Colonel reveal the deep motivation and conflict of the character. Frank Slade, as even his embittered nephew recognizes, was once a war hero, a significant figure.

His name was once pronounced and praised on a pair with the generals and even Lyndon Johnson, the president of the United States. Headwaiters of the luxury hotels and restaurants, VIP-cigar sellers, escort service providers of New York and Washington. They all once recognized Frank by the only means of his name of voice. Now the colonel is deprived of his former status and forced to live in the dark in a veteran orphanage or in his niece’s house.

Mrs. Rossi’s notice comes true by the indignation of the Colonel himself, who does not praise a polite treatment of him. Let us turn to the dictionary meaning of the word ‘’Sir’’. ‘Used for a polite or respectful way of addressing a man, especially in a position of authority’. Although this definition can mirror the military rank, and it does not exclude other kinds of status, for Colonel Slade (who lives blind-world, on a veteran’s pension, in his niece’s house) ‘’Sir’’ form of address was a bitter reminder of the good old days.

Already the second minute of an intense dialogue with Charlie makes a strong reference to one of the Colonel’s patrons from the 1960s (Lyndon Johnson). Thus, Frank finds a moment of consolidation on feeling involvement in the affairs of national importance. This necessity still shapes his keeping with the character of the past VIP.

We should pay only measured attention to the Colonel’s derisive tone on Charlie’s Oregon origin, as Frank in deen and not in name honors his young fellow as a hard-worker cultivated within a family of hard-workers. He is well aware of the Baird school high status and confronting of this information with Charlie’s scholarship will push forward their relations. By this means, one of the most prominent monologues in movie history (Frank addressing the disciplinary commission) was given light inside this dark smoked room as a matter of ironical dispute between a blind retired Lt. Colonel and a student with some previous “skin issues”.

The colonel mocks at his niece, her husband, and children, while in fact, he respects them, especially for taking care of a blind rude uncle. At this point, Frank’s rejection of his own status necessitates him to ostentatious neglect. Colonel Slade suffers from frustration and does not respect himself, which has little in common with his surrounding. Having won back his past VIP status in New York, Colonel will no longer descend to such attacks, and his final reconciliation with himself is reflected in a scene with the children.

At the beginning of the story, Frank is aggravated with himself being not in a position to drive own’s life. His “Dismissed!” on Charlie means nothing as Mrs. Rossi has already made a decision to hire Charlie. The man, whose voice once raised the roofs, now has no voice to vote for his new “seater”. One of the later scenes with Frank’s “I hate good-byes” reveals the fact that he was chagrined while saying goodbye to Mrs. Rossi. 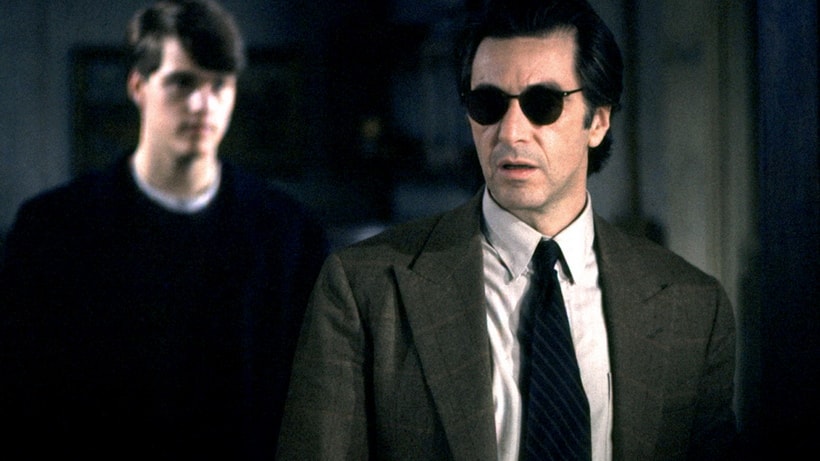 At the door of a trip to New York, Charlie comes with the job to listen to new derogatory epithets in his address and On a kindly Mrs. Rossi. Not yet being on board of the 1st class, the Colonel exudes irritation and neglect of others. As we have already figured out above, in fact, Frank can only be angry with himself.

Colonel Slade is unable to accept the fact that he has become a blind veteran, without friends and “important” connections, unable to even cross the street without help. Being completely dependent on the state (disability checks), on his niece and now on Charlie, Frank Slade behaves as if he himself asks for support when he needs it.

One step from his former status, the Colonel once again recalls the times of Lyndon Johnson. He plans to go over the walls of his niece’s care for two days, squandering a veteran’s pension, but behaves as if he will speak at the inauguration of the President of the United States in the status of a guest of honor.

In this important moment, Colonel Slade takes ‘’Sir’’ with self-pleasure. Like a turtle, he managed to escape from the shell of a routine, sitting in a chair with a cigarette. He purposely seeks confirmation of his high status as a first-class passenger and in a certain way provokes a young man to appeal to ‘’Sir’’. A privilege of graciousness, which he had previously denied to Charlie Simms.

Feeding pleasant memories of the past “good old days’’, Frank admits that he never was a person of the first magnitude, and sometimes he had to endure an almost humiliating attitude. Exactly the same he renders Charlie back at home. Now, being a key performer in this weekend in New York, the Colonel shows respect to other people who provide him gentle hood or services.

Frank praise efforts of a young costume-servant woman, his driver Manny, a head waiter, the Puerto Rican porter, Ferrari dealer. The colonel will become an instant owner of his own Ferrari, which once was a matter of high status for him. Although by the time we pay attention only to Frank’s sad comments about suicide, the moment reveals more. Frank comes to a fact that it is not a Ferrari, which defines a man. He suffers the understanding of the life he once considered as of high value, in fact in many ways far from reality.

Originating in this scene, Frank now advertise his young assistant to women, his family. Regardless of his initial irony, the Colonel gives a great value to the hard-workers, a craving for betterment, which he lacks himself. Frank indeed gratifies self-integrity to be far from the top of the mountain, but to do the work every single day. Thirty years early he was a young companion to the men of power and now he patronages Charlie in the same manner.

Frank used to humiliate people who did speak aloud his in-fact status as a blind veteran on the fringes of the former status. Finding oneself in New York, Colonel Slade felt himself to be once again a significant, formerly high-ranking personality. First class tickets, a hotel room at the Waldorf Astoria, a private limousine, dinner at the ‘’$24 hamburger’’ restaurant, Jack Daniels as a companion, elegant costumes, generous tips, a Ferrari test drive, and finally an evening with a terrific woman.

Assessing his real situation, Frank blamed blindness in his own helplessness. At the same time, he was idealizing the former ‘’glorious times’’ in the G-2 intelligence, as well as being full of cynicism towards the surrounding. The Colonel did not accept his new status. In New York, he again felt like a person, but blindness in no way prevented him from being one.

Frank believed that the woman would not go with him, except for money, but it turned out to be self-deception. He literally fascinates women, not so much with his status, costume, and money, as with charisma. Donna was fascinated by Frank, thirty years older. Acquaintance with the school teacher will later open the fact that only he himself saw a “defect” in himself.

Frank’s blindness was not a mean of rejecting a Ferrari ride, which indeed dreams come true for millions of people. It was far from obstacle to tango with a gorgeous young woman, gaining attention from other VIPs. The later famous monologue at Baird found no excuses in blindness to deliver his message and to shift the climate of thoughts, to fascinate a woman and to protect his young friend Charlie.

Other people see us the same way we see ourselves. People took Frank as a rude blind disabled as a reflection on his own treatment to himself when he spoke and acted in the manner. A gripping scene of a family war-of-words signifies this cause-and-effect relation. All about the fact, that Frank does not need to act as the Colonel he was before to inspire respect and to be polite with the other people.

The disturbing tragedy of Frank Slade deals a little with a loss of eyesight but in large measures against his rejection of reality. Staying close to Randy’s (his nephew) comments, Frank had hard luck long before the incident with a grenade. Five years before the present events, Colonel was already unmannered to people, used to get drunk and complained about the “good old” 1960s. In a determinate movie sense, Frank now has a new reason for being, personated in Charlie. When Slade heard that the biological father left the family, Frank now cannot do the same way and leave Charlie on his own. Later on, the final scene within a courtyard reveals the fact that Frank has finally accepted his current state. His new patrimony deals nothing with a battlefield, rather with people, who he cares.

Integrity and courage of Charlie Simms

‘’Scent of a woman’’ has become a true-life movie legend in large part thanks to Al Pacino and his momentous acting. However, let’s shift our focus, even leave an Oscar for best actor for a while to draw our attention to Charlie Simms as the protagonist. We have several justified reasons to manage this venturesome movie gamble.

The never-to-be-forgotten monologue by Frank Slade includes the lines, which cultivates and declares two moral virtues, Colonel himself lacks. Integrity and courage run deep into Charlie’s character as inseparable qualities, none of which should be neglected. We may put into the spotlight some more examples of Frank bringing Charlie’s soul into the open.

Frank makes us partners in crime of fooling around his young partner and taking advantage of Charlie’s simple-minded behavior. In a broader sense, Colonel himself takes some virtues of Charlie for a ride of pretending to be a VIP guest in New York. He leaves out his rudeness, sarcastic comments, and arrogant attitude. While on his pursuit of the past, the Colonel adopts the best version of himself next to Charlie and his virtues. To this extent, a 17-year-old pupil with the “blackhead story” possess personal qualities, not merely Frank but also modern society lacks.

We should keep in mind that Charlie did not say the truth to Mr. Trask, first in his office and then within the disciplinary meeting. Nevertheless, let’s remind ourselves the details of that “dishonesty”. Every time principal Trask addresses Charlie with a direct question of who is responsible for the abusive incident, Charlie actually gives him a direct answer. He cannot say. In moral contrast to George, Charlie does not shelter himself behind a poor sight, inconvenient viewing angle or misty weather. Charlie in facts speaks his own truth, that he can not say who it was, just can’t. In this respect Charlie still true to his INTEGRITY.

The second main moral lighthouse of Charlie is being characterized by Frank as COURAGE. One can doubt, that Charlie embodies the lack of self-confidence all movie long. He feels frustrated over the fact, that he has to go to New York with Colonel. The disciplinary meeting shows Charlie a trapped kid, who does not have a stomach for defending his honor. These obvious moments depict Charlie in the role of a coward, which is of course far from the truth. Let’s deepen into a few of the arguments against.