WHERE WAS THE TOURIST FILMED

In the course of the past eleven years since the movie premiere, it is Venice, the pearl of the Mediterranean coast, and the Nothern Italy in particular, which has got all the credits of admiration on the part of ‘The tourist’ audience. The February Paris, another icon-like European city, favored the story with the opening scenes with less than ten minutes of screen time. This initial shooting milestone, way more modest in time and invested production efforts, for all that, granted the movie enthusiasts with a few remarkable not to say breathtaking movie locations on the map of Paris. Elise Clifton-Ward by Angelina Jolie acts as the premier violin within this French sequence and each of the four filming sites well over accessible for a visit. To my personal regret as the author of this project and a movie enthusiast, my Paris journey did not include the ‘Place des Victoires’, the starting point of the story: an omitting is to be revised.

The early-bird free time of Elise Clifton-Ward slightly differentiates from the sun-up of Parisians and guests of the city. Being aware of the forwarding of the French police, the former agent of Scotland Yard chooses to hide in the frame. Elise leaves her highly selected (based on the location) apartment at ‘Place des Victoires’ with a view over the statue of King Louis XIV and takes a paced walking toward a fancied restaurant. All while crossing the unseen border of the 2-nd and 1-st ‘arrondissement municipal’ (municipal arrondissements), the female lead of Angelina Jolie steps into the historical heart of Paris, which has been historically appreciated as ‘arrondissement du Louvre or ‘Louvre district’. The dew shoulders and legs, as well as her between-season lady coating of cream color decisively accent the elegance of women’s beauty. Relatedly that opening scenes were shot in Paris on the last days of February 2010 in mild still winter weather.

Following a fleeting heading, Elise turns onto ‘Place Colette‘, a cozy square, named after a famous French woman writer, actress, and novelist of the XX century. Having accommodating oneself in ‘Le Nemours’ cafe, the leading character has all means to delight a modest-sized open space in the heart of Paris. Apart from the overzealous surveillance van, the panorama takes advantage of ‘Le Kiosque des noctambules’, a fanciful formation of aluminum and Murano glass above the exit from the underground. The architectural novelty accompanied the square as far back as the year 2000 as a mark of the centennium of the Parisian underground. The police commentaries on the breakfast within a favored cafe are being proved with Elise’s early refreshment. The skilled waiter in a classic black-and-white uniform of a shirt, a jacket, pants, and long apron memoriters the preference of a madam: a tea with milk, orange juice, and croissant. Elise luxuriates herself at the classic rattan (an Asian reed) chair designed by ‘Maison Gatti’, who has been producing craft furniture since 1920. The leading character takes her time with ‘Le Monde’ newspaper, an established daily periodic, once established with the help of Charle de Gaulle shortly after the liberation of Paris back in 1944. 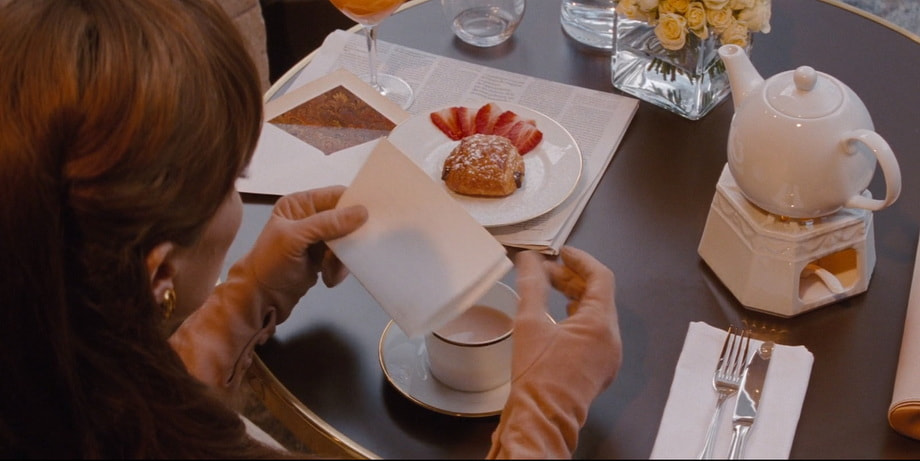 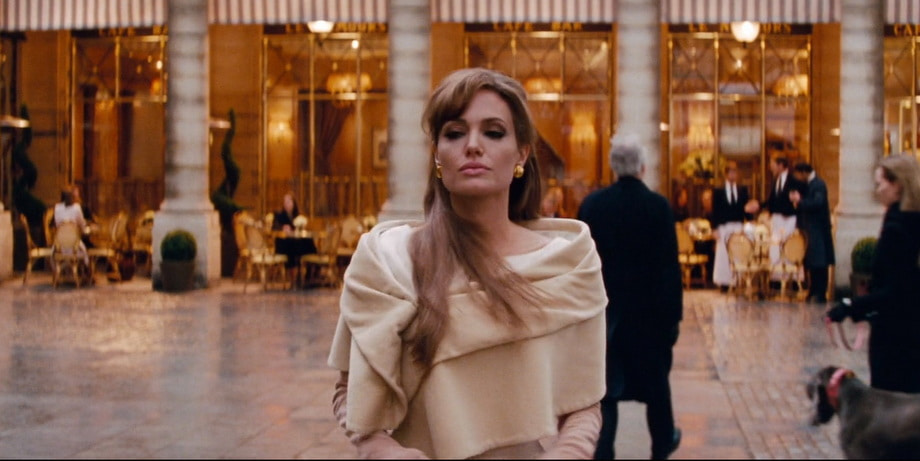 With all easiness of Elise Clifton-Ward’s morning aperitif, the sequence at ‘Place Colette’ demanded a relevance to array a scene backed by seventy background extras, including the walking gentlemen and the visitors of ‘Le Nemours’. The shooting imminently encouraged the attention of both Parisian citizens and tourists, notably piqued by the presence of Brad Pitt, at that time the husband of Angelina Jolie, as well as Frédéric Mitterrand, the French Minister of Culture. Given the fact, that Elise would later take an 8:22 train from Gare de Lyon, her choice of a fancied cafe seems fully justified as ‘Le Nemours’ welcomes guests from 7 a.m. on weekdays. 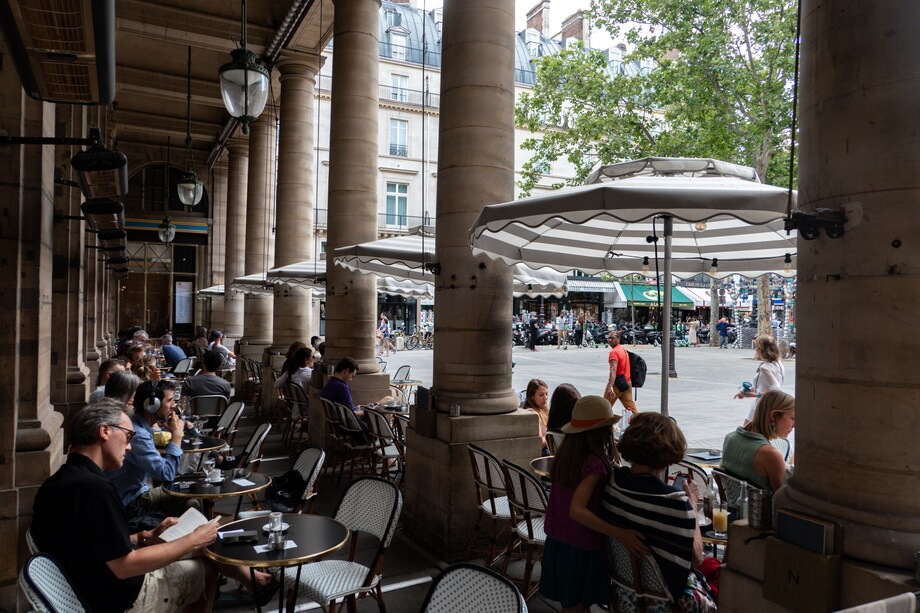 The black van is not the only source of spying on Elise as two French policemen prived themselves not much good at vanishing in the crowd of the cafe visitors. ‘Le Nemours’ is generally appreciated as a venue for a breakfast meeting, the celebration of the successful performances in the neighbor ‘Comédie Française’ national theatre, and a resting resort for thousands of city guests on their back way from Louvre. In actual fact, ‘Le Nemours’ located in the way or above the so-called ‘Parisian Meridian’ to the extent that professor Robert Langdon from ‘Da Vinci Code’ has previously revealed the ‘ARAGO’ sign short walk from the cafe. Elise appreciates a tea saucer and commits the letter to flames, leaving Scotland’s yard boss next to helpless. The leading character leaves 20 euros for a tea with milk, a croissant, and orange juice, a highly lavish consideration even for a cafe in the heart of Paris. 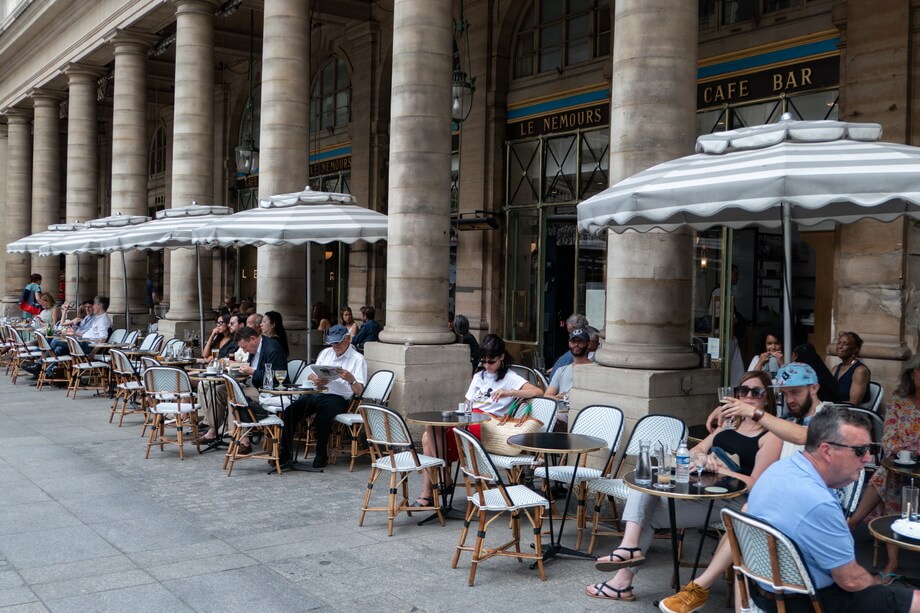 Elise Clifton-Ward leaves the French both the convoy men and her Scotland Yard superior high and dry. All while the uninformed courier guy is being put on the heat and dust of the letter is being doused, Elise takes her paced yet sure step to leave Place Colette. In the frame with Elise is being followed by a stranger, a street plate unmistakably names the principal location. Angelina Jolie’s character slips into a myriad of covered walkways and commercial galleries, leaving the agents with no better alternative than going round the block to meet her at Rue de Choisel. Taking into consideration the upcoming destination in a scene to follow, the improvised route brought Elise once again to the second arrondissement of Paris in the north direction with a distance twice as much as her previous promenade toward ‘Le Nemours’ cafe. The actual topography of the area in fact granted the agents plenty of time to follow Elise step by step at least at the same pace. 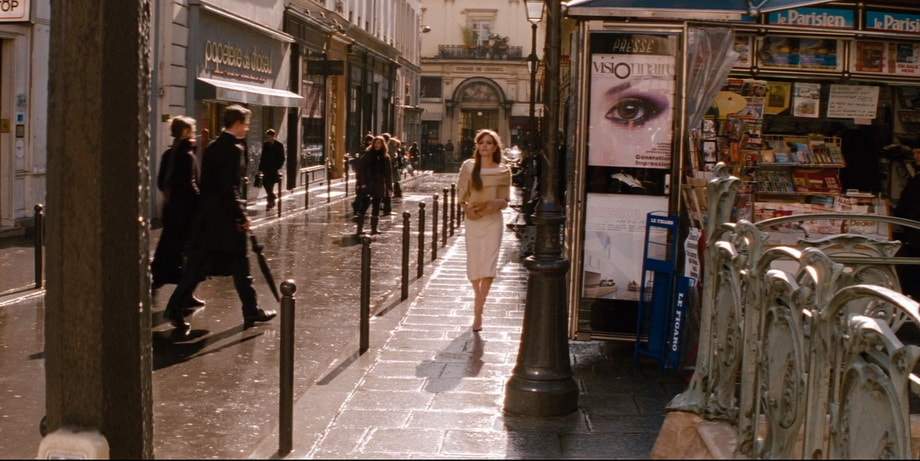 The cinematic magic of cutting the topography of the Parisian streets provides Elise Clifton-Ward with the temporary means to lose her tail while taking her way apparently into ‘Passage Choiseul’, the far end of which neighbor the third filming location. The spying van makes a stop at Rue du 4 September, a street within the 2-nd arrondissement. The erection of this particular transport arteria was once approved by king Napoleon III by another name (the street, not the monarch), yet it was renamed two years after the inauguration. Starting from those days of 1870, Rue du 4 Septembre has commemorated the fall of the French monarchy and the enunciation of ‘Troisième République’ (French Third Republic), which later ceased to exist in 1940. ‘Rue de Choiseul’, the one Elise stops at, bears the name of the French statesman of the XVIII century. 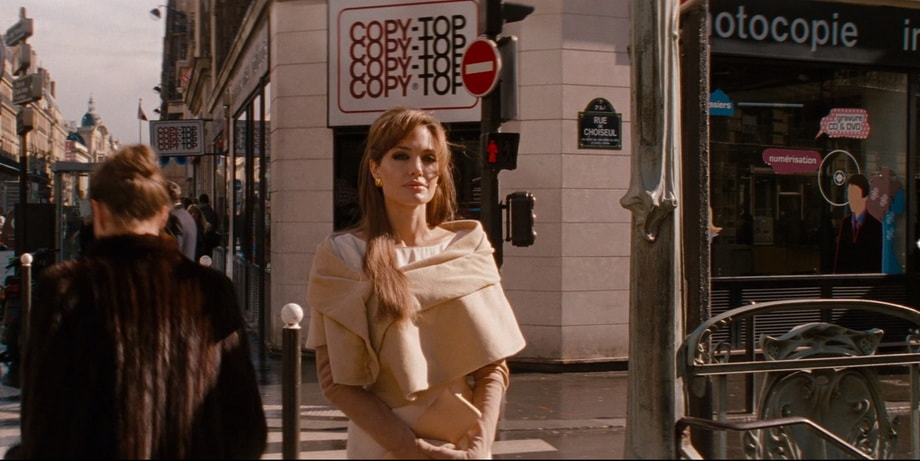 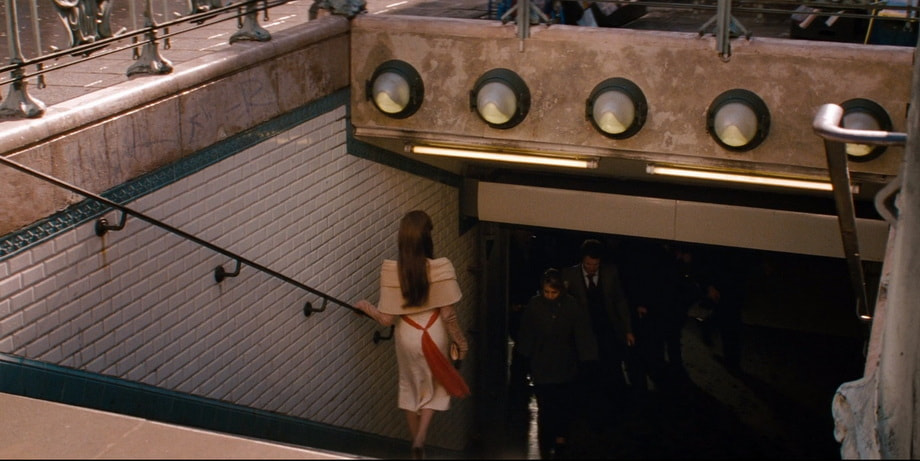 Angelina Jolie keeps one character by ignoring the February weather, passes the newspaper stand, and comes to a standstill next to the ‘Quatre-Septembre’ metro station. In the same manner as the neighboring street, the station (opened as far back as 1904) commemorates September 4, 1870, and the proclamation of a new era in French history, to no small degree dictated by a series of military setbacks against Prussia. Quatre-Septembre, one of the oldest undergrounds station in Paris, witnessed three periods of restoration with the last one in 2003. Elise takes a look at her stylish ladies’ watch, being aware that half an hour left until the 8:22 train. Moments after, the French agents outrush into the underground, but the crowd upset the plans to follow Elise. 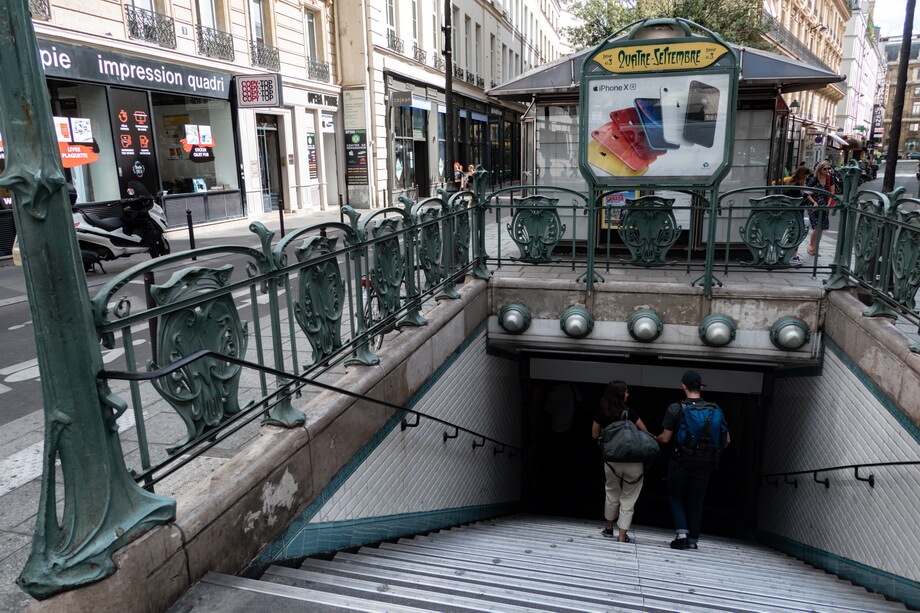 All while the French agents and Paul Bettany’s character all face the reincarnation of the ashed letter, to make matters worth quenched, Elise takes a direction toward ‘Gare de Lyon’. It worth noting, that Quatre-Septembre and ‘Gare de Lyon’ are located within two different metro lines: 3-rd and 14-th retrospectively. It notably took Elise three stops in the direction toward ‘Gare Saint-Lazare’, an interchange into Line 14, and another four stops: admittedly a route, that may be mastered in half an hour. As the letter from Alexander Pierce included, Elise has to reach ‘Gare De Lyon’ train station in the twelve arrondissement of Paris. One among six railway terminals in Paris, the ‘Lyon’ has historically appreciated as one of the busiest depots in Europe. The primary direction of long-distance trains is South, particularly Italy, Switzerland, Spain, Austria, and Germany. 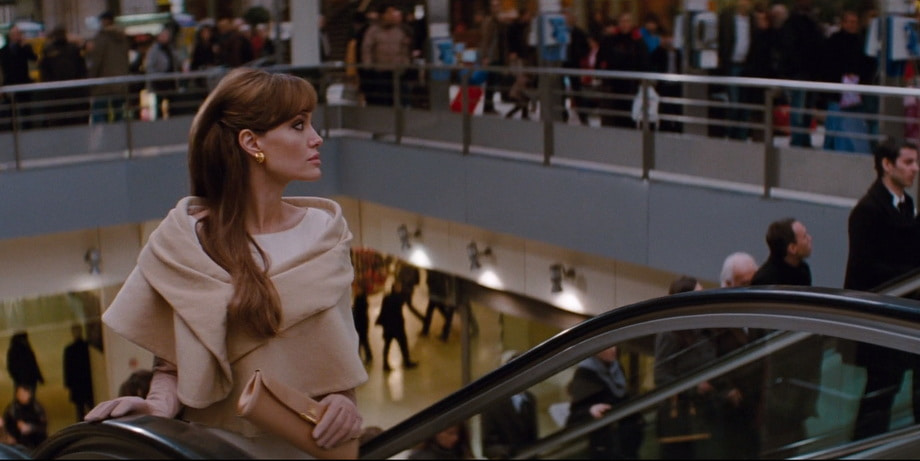 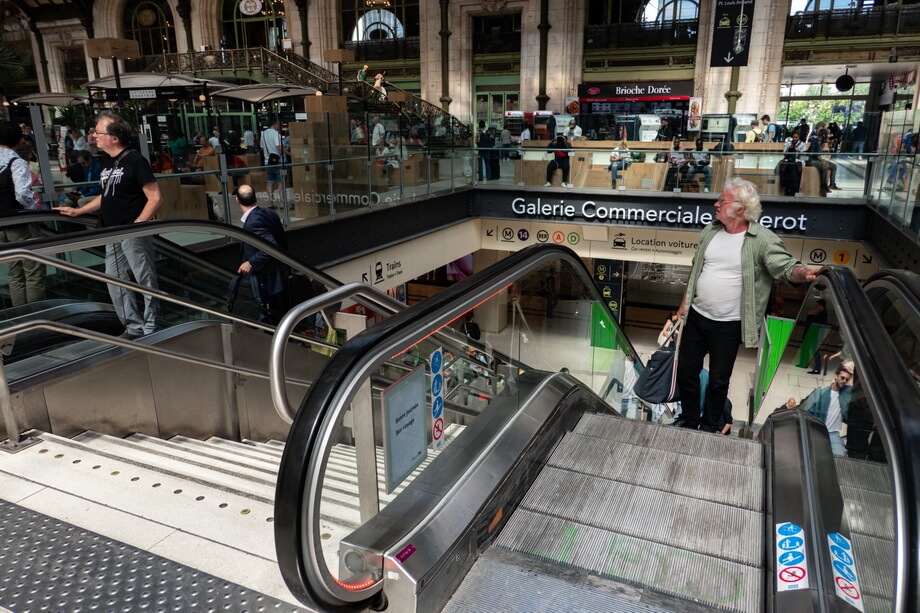 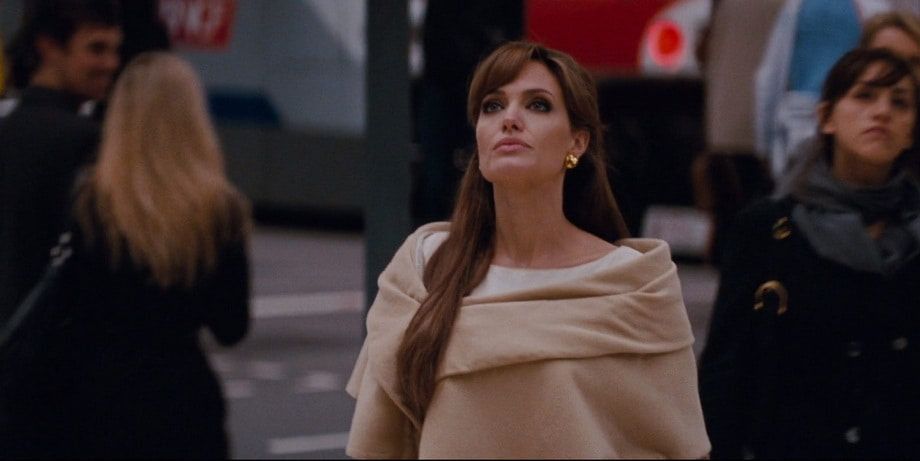 Getting out of the underground station of the same name as the depot, Angelina Jolie’s character takes advantage of the traveling stairs to find herself within one of the two main halls of ‘Gare de Lyon’. She fixates her attention on a large information display and Elise’s wisp of a smile hints at the fact that she is delighted with the destination: Venice. Train number №891007 is operated by Trenitalia, a key Italian railway operator. In the course of the ten years since the shooting, the schedule in this direction has been altered numerous times, with the preservation of the morning train from Parisian ‘Gare de Lyon’ and the arrival at Venetian SANTA LUCIA after a ten-hour journey across France and Nothern Italy. The price for such a high-speed journey varies from 100 to 250 euros based on class and dates. 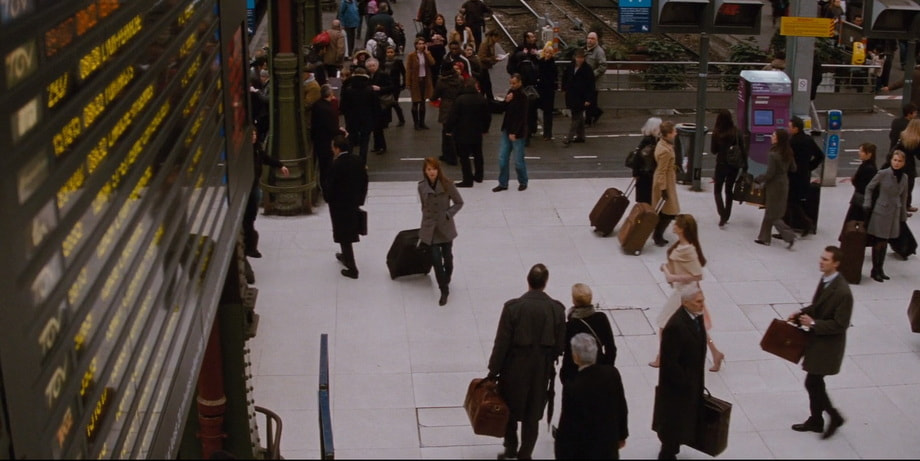 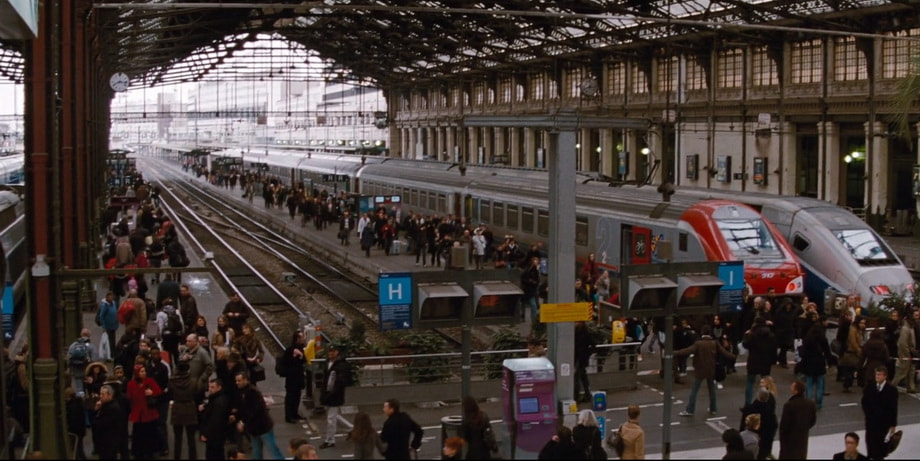 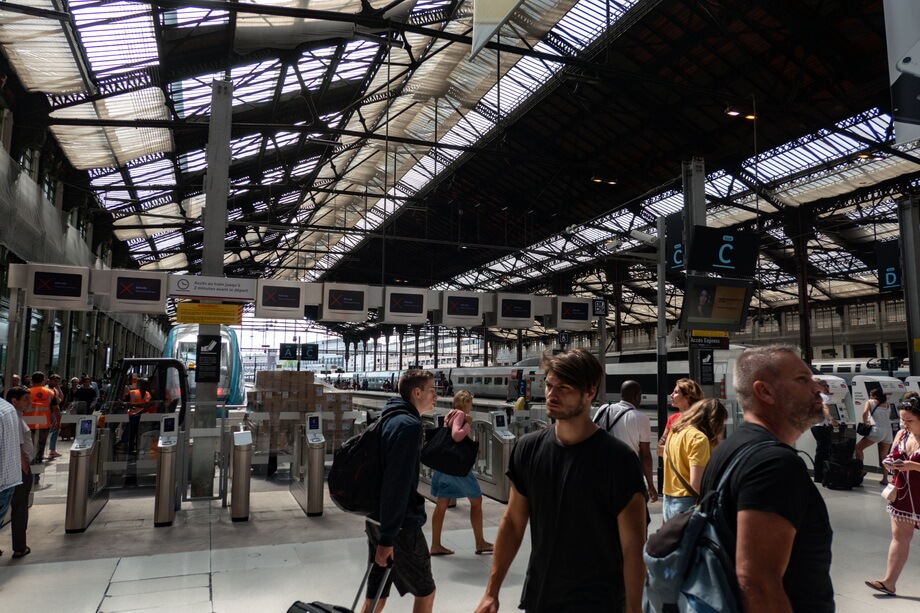 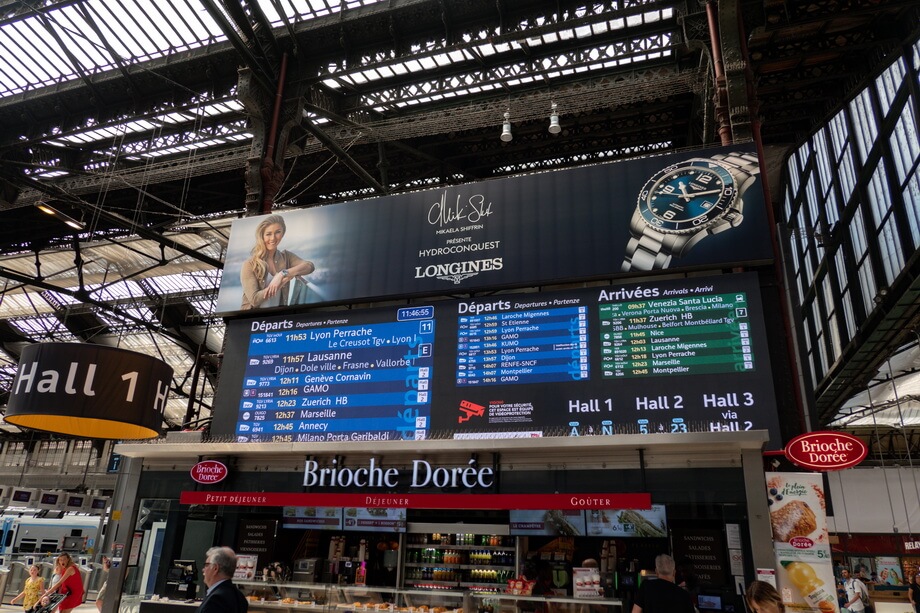 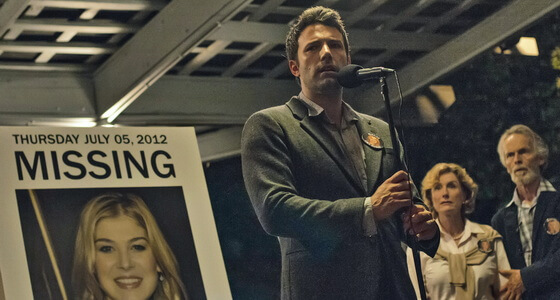 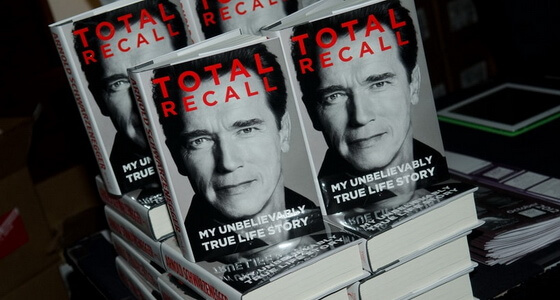 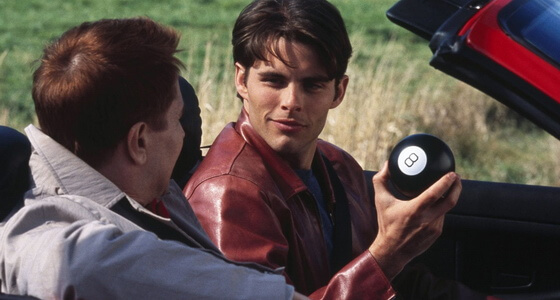 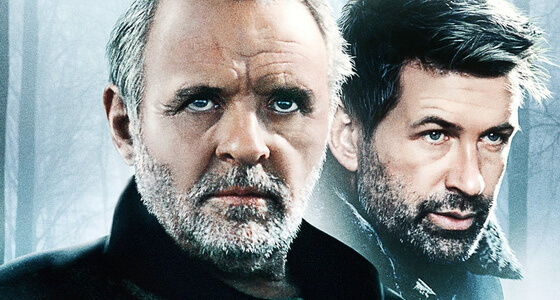 THE EDGE: CHARLES MORSE AND THE POWER OF DOING 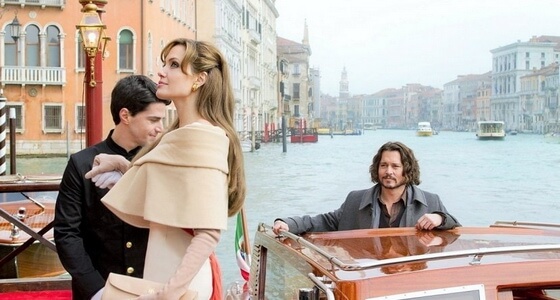